The Making of a Grand Piano You may enjoy playing or listening to the piano, but did you ever think about the making of a grand piano? The piano is a hybrid between a string and percussion instrument. The sounds are made with strings, but the strings only makes sounds when something hits them. To amplify the sound, there is a large piece of wood mounted underneath the strings called the soundboard. When the strings vibrate, the soundboard vibrates in resonance. In addition, the lid of the piano helps the sound reflect out toward the listener.

Parts of a Grand Piano Each piano is unique, but Steinway pianos have been recognized as some of the best pianos in the world. While they have the same parts as other pianos, it is their materials, craftsmanship, and piano construction that help Steinways sound the way they do.

Below is a video tour of the Steinway factory that shows the making of a grand piano from start to finish:

Working with the Wood

85% of a piano is wood, and Steinway inspects each piece of lumber to make sure it is the top grade. The lumber is air dried for up to one year and then kiln dried to remove any tendencies for warping or cracking. The wood used is straight grain, hard wrought maple that is laminated and glued together in flat grain sets. This process enhances the vibrational characteristics of the wood. The sets of maple are about 20 feet long and are carried by a team who clamps them into position on the press by hand.

Steinway has a custom press that was designed and patented in 1880 by Theodore Steinway. This shapes the outer edges of the piano – known as the rim – into the curved piano shape we’re all familiar with and after the wood is shaped in the press it is stored upright in a conditioning room for several months, depending on size. Workers at the Steinway factory attach a large piece of hard wrought maple to a specially designed press.

Inside the Grand Piano’s “Belly” 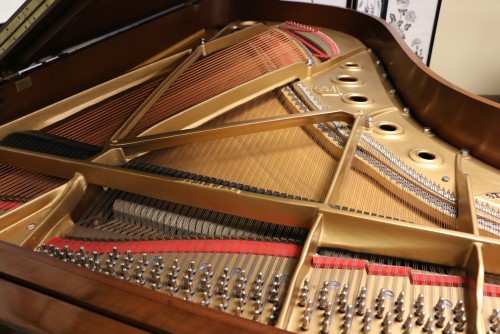 The soundboard, plate, and strings are installed in the belly of the piano by a worker called the “belly man.”

After the “belly” of the piano is assembled, the strings are added by hand and felt hammers are created. Keys are then carefully tested. When the piano is complete, it is moved to a soundproof room where a mechanical device breaks in the action over the entire scale of the keyboard. Finally, the tone is perfected by testing and fine tuning the hammers, felts and dampers by hand. The hammers are carefully installed and tested.